Louis Agassiz Fuertes was an American ornithologist, illustrator, and artist. Although less famous than his predecessor, John James Audubon, the lifelike precision and artistic fineness with which he painted have led many critics to judge him Audubon’s superior.

In 1894, while a student at Cornell University, where his father, Estevan Fuertes, served as dean of the College of Engineering, Fuertes’ talent for painting birds was recognized by Elliot Coues, the renowned ornithologist. A few years later, Fuertes collaborated with Coues and Mabel Osgood Wright on the book "Citizen Bird," for which he provided illustrations.

Fuertes was a teacher and mentor to the next generation of artists who followed him.  In particular, George Miksch Sutton, who spent at least one summer with Fuertes and corresponded with him over the course of his career: he later published letters from Fuertes in his book To a Young Bird Artist.  Fuertes corresponded with a number of other artists and also encouraged those he met at exhibitions.

Fuertes's work was immensely popular, and he received more commissions than he could complete. He was also instrumental in popularizing ornithology with the general public.  His artwork appeared in many popular formats: magazines, children’s books, and even Arm & Hammer baking soda collectors’ cards, and he toured as a speaker for groups such as local Audubon clubs.  In spite of his collection of specimens for his art, he was an early proponent of conservation and protection, especially of his favorites—the predators.

Over the course of his career, Fuertes made many trips into the field to sketch from life, traveling to Alaska, the Bahamas, Mexico, South America, and Africa.  In 1926, Fuertes joined his longtime friend, Wilfred H. Osgood, on an expedition from The Field Museum to Abyssinia (Ethiopia), in order to document the wildlife there. Shortly after his return, Fuertes died when an oncoming train struck his car. Miraculously, the paintings Fuertes had with him, which included some of his best work, were not harmed.

The Library of The Field Museum has 115 watercolors and sketches by Fuertes from the Abyssinian Expedition, such as this watercolor of a silvery-cheeked hornbill, purchased and donated by C. Suydam Cutting, also on the expedition. 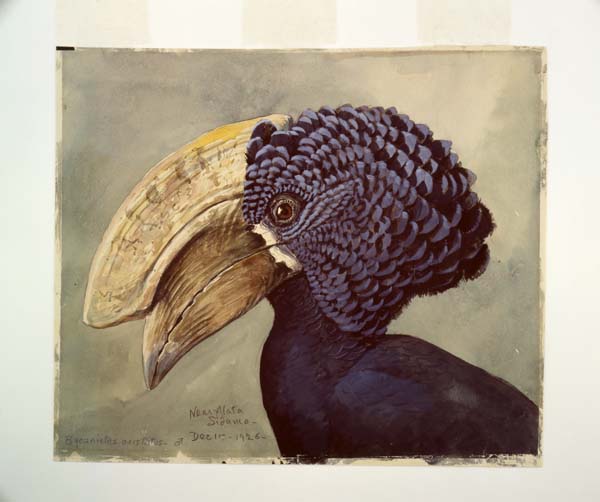 A vertical file of related articles is available for viewing in the Library Reading Room by appointment.