Through the years, Field Museum publications--along with the name of the Museum itself--have gone through numerous title changes, numbering changes, and institution name changes, which are detailed below. For the purpose of this guide, publications are separated into two major categories--general and scientific--and are further described on the relevant discipline tabs throughout this guide: Anthropology, Botany, Geology, and Zoology.

Publications highlighting some of the major collections of the Museum in commemoration of the 100 year anniversary of its founding.

A detailed description of collections as well as the establishment of the Museum. Published in 1894, the series produced one volume:

Beginning in 1894 and through 1981, the Museum published a general guide to the collections of the museum for the visiting public. Digitized guides (through 1951 and ongoing) may be found here via the Museum's partnership with the Biodiversity Heritage Library (BHL).  Another useful publication is Miscellaneous Information Regarding Exhibits at the Field Museum.

The member publication of the Museum, which was initiated in 1930, includes the serial, "A Brief History of The Field Museum" by Oliver Cummings Farrington, Curator of Geology, which was published over the course of the newsletter's first year. 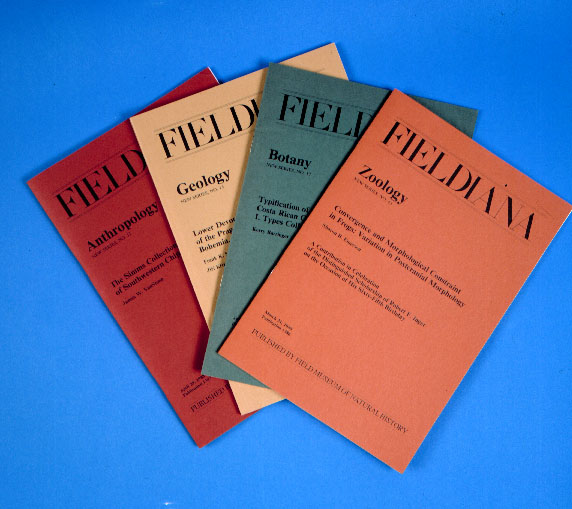 Included here are the scientific publications documenting original research that have been published by the Museum since its inception. There are four series: Anthropology, Botany, Geology and Zoology. (The short-lived Ornithological Series (1896-1917) is sometimes included within the Zoology heading.) These publications are known as Fieldiana today, and comprise the majority of The Field Museum's contributions to the Biodiversity Heritage Library (BHL). Please see individual discipline tabs for further information on these titles.

Some notes on numbering scheme:

Published only by Anthropology, this series is of particular value to those interested in design work, arts, and handicrafts.

This series had a very limited run in the early years, but each of the four disciplines did publish at least one. Each contains a comprehensive survey of the activities of the institution, with data on its history, organization, expeditions, endowments, etc. and also contained detail on certain sections of the exhibits.

Rapid inventories are fast surveys of some of the most remote, unexplored places on the planet. View the latest inventories on the Biodiversity Heritage Library (BHL) here.

A series documenting museum methods and practices. A limited run in the early years of the museum. These were numbered consecutively throughout entire technique series, but separated by their subject area.